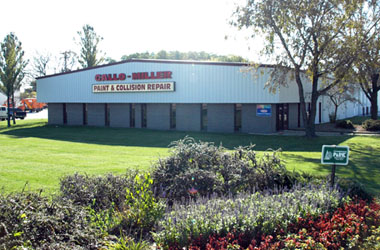 By an accident's very nature, they are not meant to happen. We don't plan for them, but most people do take precautions against them, buying insurance and building a relationship with qualified professionals.

Gallo-Miller specializes in fixing any damage done to any make or model of car. Dave and Bill have a lot of experience in the industry and can help you return your car to factory condition. We've put together this page, so you can get to know us, know our experience, and feel comfortable coming to talk with your paint and collision repair needs.

The business is locally owned, operated, and you deal directly with the owners, Bill and Dave.

Bill started with custom painting which led to body and frame repairs. Bill worked in several shops where he received training in refinishing techniques, color matching and unibody / frame repair. In 1984 Bill went to work for a major automotive dealership handling the repair needs for Cadillac, Oldsmobile and GMC customers as well as other manufacturers.

Dave entered his way into auto body repair as an apprentice and soon developed into a universal repair technician and damage estimator. The first auto body facility where Dave was employed the owner’s wife became ill. It was necessary for the owner to be with his ailing wife and Dave assumed the responsibility of running the shop at an early age. After twelve (12) years as a repair technician Dave was approached by a major insurance carrier to become an estimator. After much thought and deliberation he made the choice to join that company. The experience was invaluable and Dave gained great insight on how the insurance claim industry operated. After seven years Dave’s roots began pulling him back to the auto body repair industry. In 1997 Dave joined the collision repair facility where Bill was working. That facility was bought out in 1998 and then the focus of that facility changed from the customer to how many repaired vehicles can be produced.

Due to their love of the industry and passion for the customer this did not sit well with Bill or Dave. They made a decision to open and operate a facility where the main focus was the customer, quality repair and where they would be in charge. They invested their life savings into the business and are involved in your repairs from beginning to end.

View Larger Map
Please enter the Page ID of the Facebook feed you'd like to display. You can do this in either the Custom Facebook Feed plugin settings or in the shortcode itself. For example, [custom-facebook-feed id=YOUR_PAGE_ID_HERE].

Having a car accident is a serious matter. Choosing the best collision repair specialist is also very serious. We walk you through the repair process and return your car to factory condition.

At Gallo-Miller we offer free estimates for all auto repairs. Stop by anytime during normal business hours and one of our Estimators will take care of you.